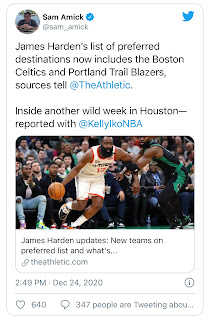 Houston Rockets All-Star James Harden clearly isn’t happy in Houston. So much so that reportedly he has expanded his list of desired trade destinations.

That list, according to The Athletic, now includes the Portland Trail Blazers and Boston Celtics.

Harden, 31, reportedly listed the Brooklyn Nets as his top choice. He later added Philadelphia, Milwaukee and Miami. Now, the Blazers and Celtics have also made the list.